The Black History of Mardi Gras: Should Black Americans Celebrate It? 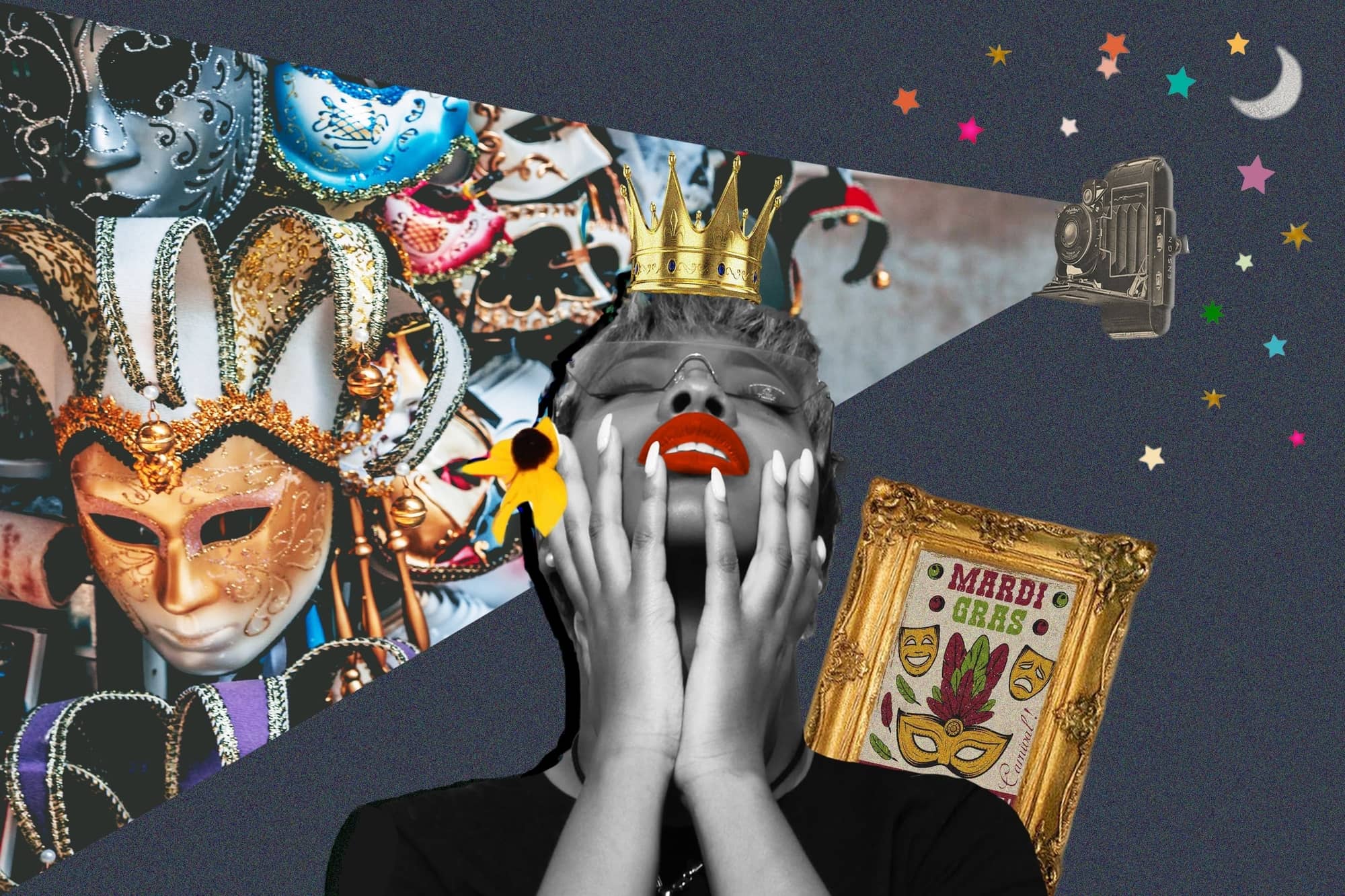 In the U.S., Mobile, Alabama is the hometown of the oldest Mardi Gras celebration in the country. However, New Orleans claims the honorary title for being the carnival’s popular destination and hotspot. Mardi Gras is a celebration rich in cultural tradition, where Black folks are able to let loose and let the beads flow! This spectacular event not only serves as a refreshing reprieve bursting with energy and high spirits, it also provides space for reflection, allowing Black and brown people to explore their lineage and past. Towns warmly embrace tourists, who in turn actively pour in revenue that helps boost the economy. Schools shut their doors in frenzied anticipation and Bourbon Street is filled with the magical music from the Rebirth Brass Band.

No amount of plush souvenirs, spectacular feasts, or alcoholic drinks could diminish the dark racial undertones.

Conversely, there’s the assertion that African Americans shouldn’t spend their time and energy celebrating Mardi Gras due to its perceived racist practices and exploitation of Black people. Historically, Mardi Gras is multifaceted, offering a performative, glossy appearance of harmless fun and grandeur. But no amount of plush souvenirs, spectacular feasts, or alcoholic drinks could diminish the dark racial undertones.

Behind the remarkable aesthetics and massive celebrations are forms of subliminal suppression that date back to the Civil War. Just a few years ago, amid parade routes in Slidell, Louisiana, street vendors can be seen pushing their merchandise with Confederate flags embedded underneath. Perhaps it’s important to note that Slidell was founded and named after controversial American politician and Confederate ambassador to France, John Slidell, so this racist legacy shouldn’t be surprising.

Confederate flags aren’t the only tokens of white supremacy that mar the seemingly jovial holiday.

There’s been Mardi Gras beads memorializing the now-removed, disgraceful statue of Confederate general Robert E. Lee, along with parade floats that ridiculed Colin Kaepernick. Reports recently surfaced of a 12-year-old girl being given a doll dressed like an enslaved person with a beaded noose around her neck, and a two-year-old being handed a figurine of a black boy carrying a watermelon. Meanwhile, relics of 1873 Mardi Gras parades continued. Predominately white krewes avidly discriminated against Black people until 1992, when New Orleans legislators finally desegregated them. Nineteen years prior to the desegregation ordinance, the Zulu club extended an olive branch in 1973, becoming the first parading krewe to welcome other races into its ranks.

Given recent controversies involving blackface, Mardi Gras organizers have again faced additional scrutiny for allowing white participants to wear the offensive paint. Zulu club officials, who see up to millions of men and women touching down on New Orleans’ storied avenues for the 4.5-mile annual parade, don’t associate their customs with the demeaning historic imagery. Black and white Americans alike are free to participate in the century-old event which was once spearheaded by legendary Jazz musician Louis Armstrong (the Zulu King), and endorsed by several respected civil rights advocates (Spike Lee and former mayor Marc Morial to name a few). Regardless of general approval, Take Them Down NOLA, an activist group that demands the removal of all confederacy statues from public property and buildings, criticized the Zulu portrayals as racist depictions and caricatures.

Mardi Gras has an extensive background riddled with religious nuances.

The name Mardi Gras is derived from the French words, meaning “Fat Tuesday.” Part of Fat Tuesday’s cultural makeup was introduced by French settlers in the early 1700s, whose leisure activities came in the form of balls and masked parties. On top of being the last day for fasting Christians, particularly Catholics, to eat rich and fatty foods, Mardi Gras is a joyous occasion that’s bursting with lively dances, beads, dinners, masked balls, processions, floats, and marching bands.

A prime example of intertwined religious roots is the King Cake, a traditional dessert that possesses biblical significance. The fried, doughy goodness, which is glazed over in traditional Mardi Gras colors (purple, yellow, and green), dates back to Medieval Times where certain European cultures and religions commemorated the 12th day of Christmas with presents and pastries. This is where the “King Cake” namesake is derived from. The cake’s circular and braided structure is meant to symbolize a crown while a miniature baby figurine is baked on the inside.

However, we must acknowledge that modern observances tend to garner adornments that aren’t religious in nature such as elaborate masks, rich beads, and costumes. They stem from other practices just as Mardi Gras is also intertwined with African spirituality and traditions.

Similar to people’s identities behind the masks – parade dates, routes, and times – are shrouded in secrecy.

Oftentimes, this event is rooted in African American traditions, including the Zulu parade and Black Indians donning colorful, handmade regalia. Masks and fashion can also allude to the heroic methods exhibited by our ancestors during slavery. The majestic component could be reminiscent of Louisiana’s forgotten Tigon Law, which prohibited Black women from celebrating their identities and natural forms. Black women were prevented from displaying their hair publicly for nearly 20 years.

The beauty and radiance of Black women caught the attention of the white men. The social ramifications of this phenomenon led Governor Esteban Rodriguez Miró to order Black women to wear head wraps as a way to suppress their femininity and reduce them back to an inferior position. In a rebellious display, they swapped the drab, muted colors of ordinary headwraps for brightly colored swaths of fabric. Even after the ban was lifted, they continued to proudly wrap colorful scarves around their heads as a representation of empowerment. The secretive, alluring Mardi Gras outfits can be an embodiment of this. The eye-catching costumes are also decked out with feathers and jewels, similar to the scene of Ma Rainey taking the stage and captivating the audience.

Mardi Gras commemorates the artistic contributions, enduring strength, and resilience of their ancestors. The celebration transformed when European immigrants created krewes to become a ritzy club monopolized by wealthy politicians and businessmen, who marginalized people of color to host their celebrations on the outskirts of town. Black people who were displaced in low-income ghettos were left to cultivate their own magic and mystical traditions. Black Americans gradually formed clubs with distinct themes and styles that were grounded in 20th century pop culture.

Not be overlooked during this important historical chapter are Black Mardi Gras Indians.

Since the 1880s, tribes have been recognized for their ceremonial dress and courage, honoring local Native Americans who helped slaves escape from the tyranny of bondage. Their Native American brethren were key allies in achieving Black liberation, welcoming escaped Black people among their ranks. Intermarriage and the intermeshing of cultures allowed both groups to pass down their lineage, tribal chants, music, and oral traditions through generations. Masking to Native Americans, is a form of solidarity and shared oppression with African Americans.

For current and future NOLA residents, Mardi Gras can be viewed as a medium in which ancestral knowledge can flow from the elders uninterrupted, not just in terms of customs, but the racial terrorism they had to endure as well. Once again, in the face of horrors and injustice, we’re able to overcome, not only by surviving, but by prospering.

When people ask, “should Black people celebrate Mardi Gras?”, the answer is a complicated and distorted one. Yes, Mardi Gras has a deeply checkered past (and present), but Black people were able to transform it into their own. In a world where Black cultural identity has been painfully stifled by the passage of time, hatred, and white supremacy, Mardi Gras is just one of the ways for us to uphold our excellence.